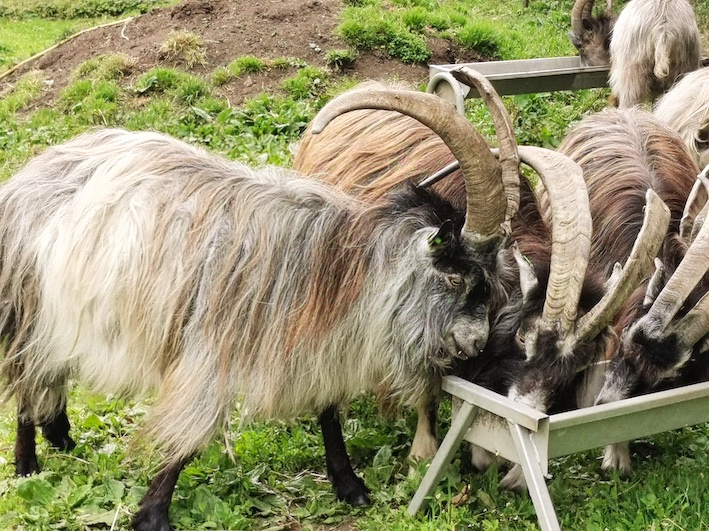 A sanctuary and visitor center in Mulranny County Mayo, has been built to protect the endangered old Irish goat.

Over 200 articles written by Ray Werner, President of the Old Irish Goat Society, researcher and rare breed specialist, is now available.  This wealth of information about the Old Irish Goat in particular and northern Hemisphere landrace goats, in general, is the result of 60 years of research by Ray that he has now generously made available to the society to share with the public.

This comprehensive archive, impressive in volume and rich in information contains articles on a variety of subjects relating to the Old IRISH goat, documenting the journeys of discovery, phenotype, history and the society’s efforts to protect and preserve this animal, fast disappearing into mixed feral herds of European blends.

You are invited to browse: https://oldirishgoat.omeka.net

Minister Michael Ring turned the sod in celebration of the new 5-acre sanctuary in Mulranny. It stretches from the N59 to near the Great Western Greenway up the hill.  It is a terraced landscape that was once farmed, abandoned for decades, and now brought back to life. Panoramic views of Clew Bay are seen from the top end entrance.

It has been designed so that any Greenway user, whether on bike or foot, has easy access to the Sanctuary and a short walk on to the Centre from the base.  Here you are invited to explore the exhibit space, see a short film, browse the gift shop and visit the goat playground.

Check out the article from the Connaught Telegraph.

A Decade for a Dream 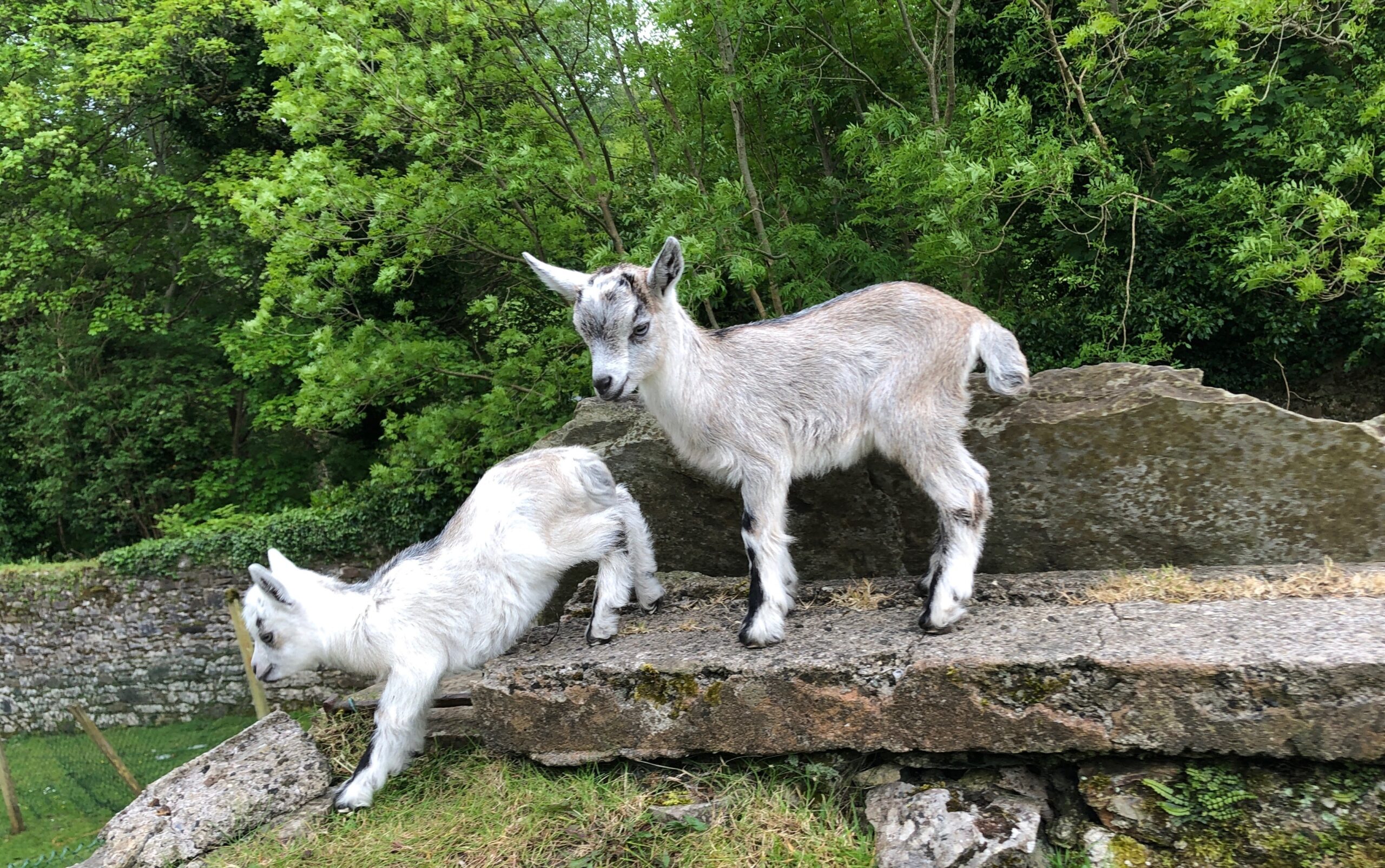 It was almost 10 years ago that Old Irish goats were discovered among the feral herds of Mulranny mountains; a hardy animal that had survived thousands of years of harsh Irish winters and lack of animal husbandry, an animal that had served a mighty purpose keeping people alive in times of extreme suffering and poverty, an animal that was all but forgotten and abandoned to the remote hills and mountain landscapes of Ireland.

Now, after a decade we have a story to tell. How this goat was recognised and given back due value, how science was used to validate unique Irishness, and how these goats can once again serve our communities, be placed back into Irish agriculture as a charismatic tourism attraction, used for conservation grazing projects and become a farm animal again.

The dream has changed over the years as boundaries shifted. First, it was the dream of simply catching a few of these smart wily animals. Then it was establishing a safe place to look after them and starting a breeding program. Confirming their identity with DNA studies was certainly necessary if we were to herald them as a unique Irish breed, distinctly different from any of the European breeds that had infiltrated the herds of Ireland over the last 100 years. The dream to have the breed nationally recognised was always in the forefront and to expand the breeding program to keep the DNA refreshed was a pressing concern with the limited stock. This drove a search nationwide to discover Old Irish goats scattered in remote locations around the country. It was quite an adventure!

All these measures took time and money that the Old Irish Goat Society took responsibility for. The Department of Agriculture and other grant agencies assisted with small funds to keep the animals cared for and covered the costs of DNA studies. This attracted the attention of the media and the public became fascinated with this long-haired, large horned goat of Irish heritage. They wanted to know more, but the small society herd remained private. It has grown from the original 3 captured in Mulranny back in 2011 to 45 as successful breeding began.

A small exhibition centre and gift shop opened when the society acquired the lease of an old Garda station a few years back while the herd remained safely ensconced in a walled garden 30 km away.

However, all that is about to change. Soon they will return to Mulranny where a sanctuary and renovated centre is in the process of being established.

Here visitors will be able to see them close up, view a film documenting the journey from the beginning and be fascinated by the display in the exhibition space. The gift shop will be filled with handcrafted items, all made locally by the talented ‘Gift of Hands’ group with recycled textile offcuts from the Foxford Woollen mills.

To watch goats cavort on Goat Mountain and be amused by the antics of the ‘kids’ in the goat playground will be a treat for the whole family. Visitors will be fascinated by this heritage animal, saved from extinction in the nick of time!.

The Centre and Gift shop will be open by August 2020 and the Sanctuary will be open to visitors in the spring of 2021.

Save the Goat Group is not Kidding 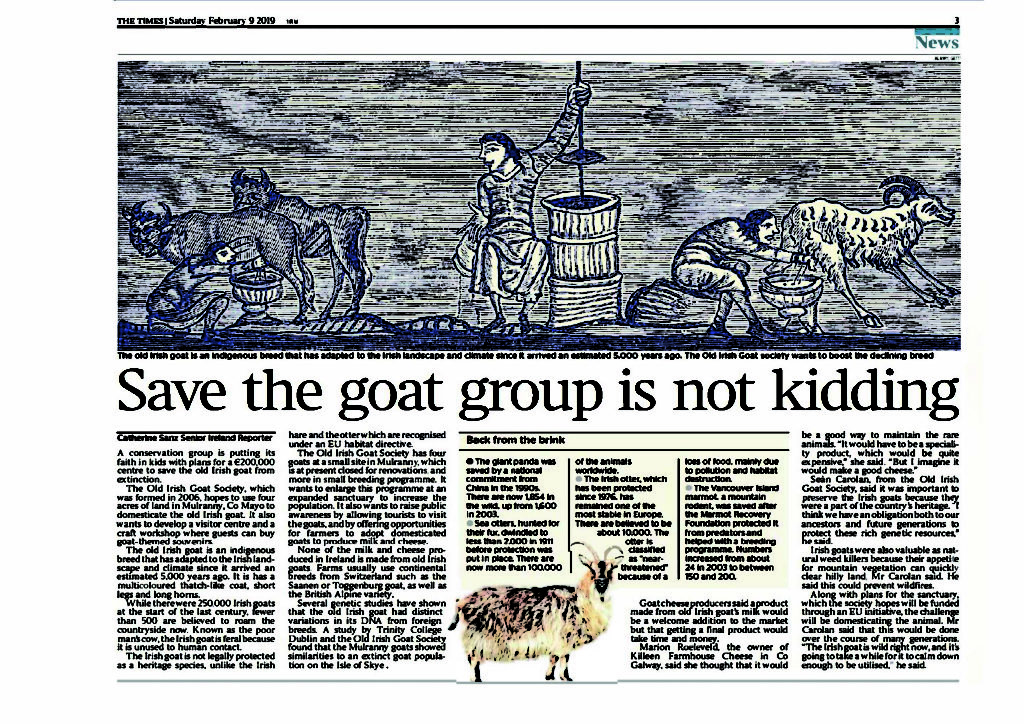 A conservation group is putting its faith in kids with plans for a €200,000 centre to save the old Irish goat from extinction.

The Old Irish Goat Society, which was formed in 2006, hopes to use four acres of land in Mulranny, Co Mayo to domesticate the old Irish goat. It also wants to develop a visitor centre and a craft workshop where guests can buy goat-themed souvenirs.

The old Irish goat is an indigenous breed that has adapted to the Irish landscape and climate since it arrived an estimated 5,000 years ago. It is has a multicoloured thatch-like coat, short legs and long horns.

While there were 250,000 Irish goats at the start of the last century, fewer than 500 are believed to roam…

Read the whole article at The London Times.